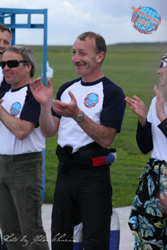 "Formacists"is what they are called at the airfield. Under the supervision of Viktor Kravtsov, world record-holder, captain of several records and academician of the formaceutical science who has dedicated all his skydiving life to formacy studies, you will be able to hone your skills to work in formations of any size.

Students of this School are guests welcome in any figure, either a small anniversary formation or a World Record. To enter the School, it is enough to possess basic skills of group acrobatics (which can be obtained at the Personal Mastery Department) and to take any day-off to come to the Aerograd Kolomna.

If for some reasons you lack confidence or are not ready to blend into a team right off the reel, the Alpha Group offers its services which will help you raise your skills to a proper level.

What is formation skydiving?

Well, the aircraft has got off the ground and is now ascending with its two, four, fifteen (at choice) 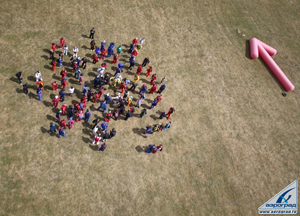 engines rumbling, growling, bellowing (at choice). Having made yourself comfortable on the seat, huddled up lying on the floor or convulsively hugging a wheel (as it might be), you are pondering over some fundamental issues. Say, over the yesterday's party or the upcoming trip to Zanzibar, or that Bob (Nick, Peter) owes you some money, but does not repay or... but wait! Let us recall who you are and where you are. Recall that in a few very short minutes you will hear the "Go!" command and the action will begin, the action which have made you ride, walk, crawl (as luck would have it) all those 100 km to the airfield. Recall how the figure looks like. No, not your girlfriend’s figure who had a dinner with you the night before and... stuff like that, but the figure to be built in the air. Your position in the formation, its axes and orientation points, in brief, everything that the instructor has told you when still on the ground. And perhaps, in spite of a great evening you had, you will manage to recall all the stages of the jump. 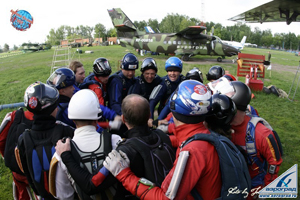 results in further wasting time on regaining the position, orientation in space, catching up with the base already "gone" quite far away. Moreover, difficulties are faced not only by a person to be blamed for such a situation, but also by other sportsmen leaving the aircraft afterwards. In case of a correct exit (rest on hands, body flat open to air flow, legs thrown back), the sighting of the figure is never lost, and therefore one can proceed directly to stage 2 without wasting precious time on correcting the situation.

2. Immediately after the exit, but not upon approaching the formation, it is necessary to choose a right direction to enter the sector for approaching the figure based on the knowledge gained during the ground training and keeping in mind that any formation approach is always performed along a straight line only.

3. A speed rate for approaching a formation should be optimal both for fast approach and safety issues. One should be sure that a chosen speed rate is under control. No intention to approach a figure as fast as possible can justify any collisions in the air! Therefore, to eliminate any risks of collisions with a formation and just for inexperienced skydivers "not to fall through", it is recommended to make two or even three "platforms" (de-arch, abdominal muscles tensed, arms and legs stretched) to control their speed. The extreme "platform" of a glide path for nearing the figure should be at a distance of 2-3 meters both horizontally and vertically. When approaching the figure, hunting is forbidden, and I will repeat myself: all approaches are performed along a straight line only. If the glide path has been chosen correctly, what is left to do is to fly a few more meters from the extreme "platform" to the formation and take the position in it.

4. Arrival at the formation is just the beginning of one of the most complicated stages of a formation jump. For the entire figure's steady fall without any pulling, each formation participant should fall independently at the same speed while tracking the horizon and simulating grips.

5. Despite an obvious wish to continue falling "... a little bit longer because not everybody seems to have approached yet over there, on the left...",the break off command should be considered an order and fulfilled without any demur! Thus, at a signal formation participants all together or tier by tier, depending on their preliminary arrangements, do a 180 degree turn from the center of the figure and begin scattering along the most sloping glide paths. When breaking off, each sportsman has to look out for any collisions if the routes cross. A signal for the completion of breaking off and deployment of a main parachute must be given not by huge tree branches just next to you or the Instructor's screams of despair, but by the sound of a "tweeter" device set for a height of 1.000-1.100 meters. Anyway, you should be under a fully inflated canopy at a height of not lower than 800 meters!

6. But even now, when thank goodness the main parachute has opened to a parachute rigger's surprise, the formation has been built and one can easily reach the start, the jump is not over yet. Therefore, it is too early to relax. Until you land, and to be more precise – until you leave the landing area, you should constantly move your head around, 360 degrees! It is just impossible to be too vigilant under a canopy. Keep in mind that someone can be less watchful than you are. However, if at least one of the two sportsmen with crossing routes controls the situation, this can help avoid very serious consequences. Strict observance of the landing direction rules, circles for landings and sometimes, if agreed upon, landing priority can protect you to a great extent from unpleasant incidents at the final stage of a jump.

Good luck! And have unforgettable and safe jumps!